You're now in the first room of the Vienna Classical era. The composer presented here, Joseph Haydn (1732-1809), is considered to be an innovator and pioneer of this musical style.

Whilst it used to be common practice to compose for God and our Master, the Vienna Classical era broke with this tradition and its music was written for a wide audience. At that time, a market also emerged for freelance composers, which Haydn fully knew how to exploit. With the help of the newly-established music publishers, he was able to compose "on a freelance basis" and sell his works to international clients.
When you consider that Haydn grew up in very modest circumstances, he enjoyed a remarkable career. The four houses where he once lived are depicted to the left of the room and provide a good illustration of his journey. He grew up in the humble farmhouse in what is now Lower Austria, as the child of a simple agent of Count Harrach. The boy's talent was quickly recognised, and after basic musical training from his uncle, young Joseph came to Vienna's St. Stephen's Cathedral as a chorister. As a result of an unfortunate escapade and his voice breaking, he lost his place in the choir. There followed several years of hardship that young Haydn had to eke out in the attic of Michaelerhaus. But on the genteel floors below lived people who could help him: the Habsburg Court poet and opera librettist, Pietro Metastasio, whose servant and pupil he became, and especially Princess Esterházy, with whose sons Haydn soon reinvented himself as Court Musical Director. The Esterházy's palace in Eisenstadt is the third building depicted. 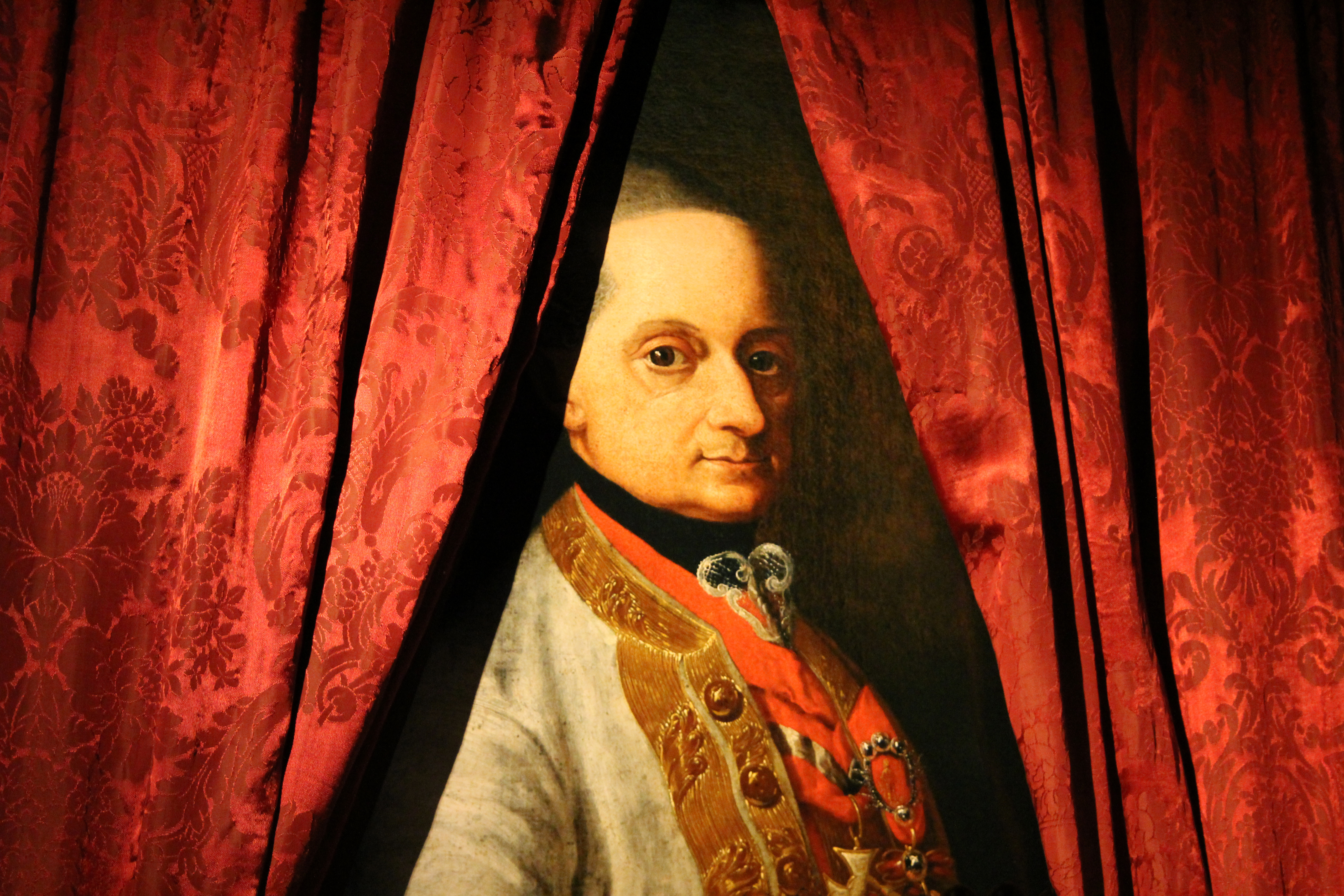 Under Prince Nikolaus Esterhàzy I., who is pictured above the sedan chair in the left-hand corner of the room, Haydn was able to develop his musical talent for 30 years. Thanks to a decent pension and two hugely successful concert tours to London, he could even afford his own home in his old age – the final building pictured here is still standing today, and open to visitors (Vienna Museum – Haydn's House).
As you can see from the exhibit on the end wall of the room, Haydn was a highly disciplined person who adhered to a very strict daily routine. It was probably due to this perfect organisation that he was able to accept composition commissions alongside his full-time employment with the princes, thereby making an international name for himself. This reputation also preceded him to England, where he became the star of the London music scene during his concert tours. Naturally he also found inspiration for his work in England: the melody of the Emperor's Hymn is said to be derived from the English anthem "God Save the King", and Leopold Haschka's original text also resembles its English counterpart. What is probably Haydn's most famous work, "The Creation", was also written following his trip to London – the scene behind the string quartet depicts the performance of the Oratorio in honour of Haydn's 76th birthday, and to its right, you can see the picture again, together with a detailed caption.
Haydn reached a ripe old age for those days, but during his final years, he was no longer able to compose. Haydn's final string quartet, Op. 103, which he himself called "my last child", consists of just two movements - you'll find the score in the display cabinet. Instead of a final movement, Haydn attached his last visiting card with the words: "All my strength has gone; old and weak am I."

Haydn received the last major acknowledgement of his work shortly before his death. The French Hussar officer of Italian descent, Clement Sulemy, performed the "Mit Würd und Hoheit angetan" aria from The Creation for the agitated old man. He was the last foreign visitor that Haydn received, and under the most difficult circumstances: Vienna was besieged and bombarded by the French. When a bomb exploded close to Haydn's small house, making it shake, Haydn shouted: "children, fear not, no misfortune will befall you wherever Haydn is."

Performed by the Vienna Philharmonic at the 2009 "New Years Concert" in the "Golden Hall" of the Musikverein building, under the baton of Daniel Barenboim.