You're now in the second room of the Vienna Classical era, where you can follow the development of the child prodigy Wolfgang into the genius Mozart (1756-1791).

As you can see from the facsimile on the right-hand wall (next to the entrance), Johannes Chrysostomus Wolfgangus Theophilus Mozart began his career very early – he composed his first piece of music at the tender age of 5. Incidentally, the name Theophilus first became Gottlieb and ultimately Amadeus. Mozart himself never used the Latin version, and called himself Wolfgang Amadé from 1780.

His childhood was dominated by travel - as a child prodigy, he performed in all the major cities, together with his sister, Nannerl, and was celebrated wherever he went. As a young man, however, things were no longer as easy. Throughout his life, he tried to secure a permanent court position; he finally succeeded at the Salzburg Court of the Archbishop, but soon fell out with Colloredo and was then rudely dismissed by Count Arco's famous "kick up the backside". Four years before his death, he was given another chance in Vienna under Emperor Joseph II., but "only" as a chamber composer for the Viennese Court balls. Mozart only lived to the age of 36, but during the 30 years he was composing, he wrote an enormous number of works. He also continued to travel, often under the most arduous conditions, conducted, studied opera, taught and accepted composition commissions. Although Mozart's music may appear light and full of harmony - his life was not.

The screen in the right-hand corner shows that Mozart first wrote the violin melody of his compositions, only adding the piano accompaniment later. He had usually already finished the melodies in his head and only needed to write down his musical outpourings; his scores contain virtually no corrections. 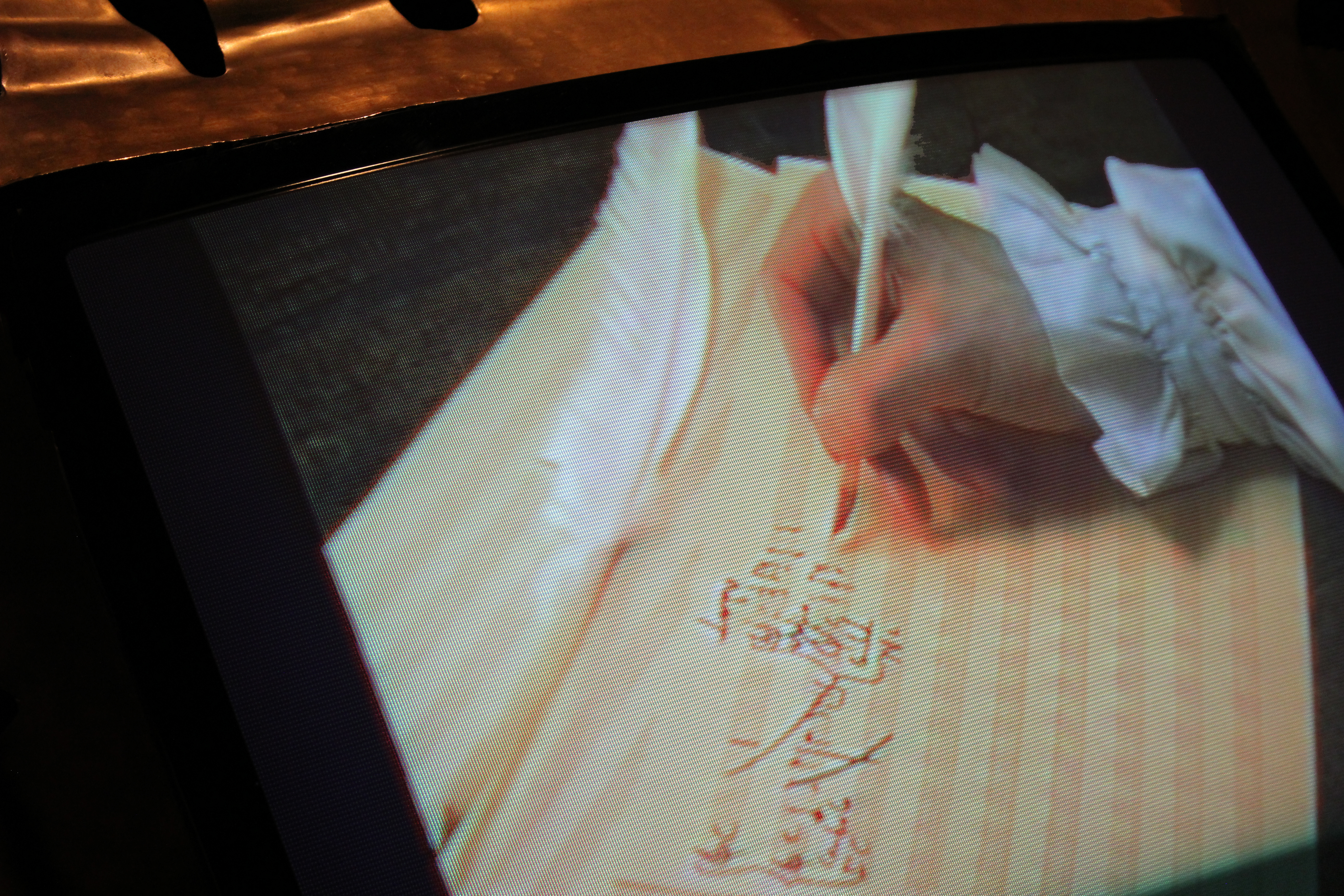 Probably Mozart's most famous opera is "The Magic Flute". To your left, you can see the playbill advertising its premiere (1791), along with facsimiles of two arias and puppets of "Sarastro the Enlightened Sovereign" and his opponent, the "Queen of the Night". On the pillar, you'll also find the Schinkel stage sets from 1816, and next to these, a model of the State Opera's new production on 1 June 2000. Objects from three centuries therefore shed light on the influence of mindset and zeitgeist on art. When discussing The Magic Flute, we must never forget to mention the freemasons: both Mozart and Emanuel Schikaneder, who was responsible for the text, were lodge brothers. The opera is peppered with Masonic symbolism, such as these words from the final chorus: "May power be victorious, and crown as a reward beauty and wisdom with an eternal crown", thus citing the highest Masonic ideals.

It is well-known that Mozart did not have any special preference for wind instruments, and anything he composed for these instruments were mostly occasional or commissioned pieces.
Mozart probably composed his oboe concerto in C major, KV 314, in 1777 for Italian composer and oboist Giuseppe Ferlendis (1755 - 1810).
In 1778, Dutch doctor and amateur flutist Ferdinand Dejean (1731-1797) commissioned Mozart to compose a few flute works for him. Mozart composed for Dejean, among other things, the flute concerto in G major, KV 313, and the flute concerto in D major, KV 314; he adapted his oboe concerto for the latter. The oboe concerto notes were lost for more 100 years, and their existence was only known due to references in Mozart’s correspondence. It wasn’t until 1920 when Austrian musicologist, conductor and composer Bernhard Paumgartner (1887 - 1971) found the oboe concerto vocal score at the Mozarteum in Salzburg, which confirmed that the flute concerto in D major was actually a revision of his work for the oboe.
Nowadays, Mozart’s oboe concerto and his flute concertos are among the most popular and most-performed works of his wind music repertoire.

Mozart also received composition commissions from the lodge, acted as an independent concert organiser, gave private lessons and also received a fixed salary from Emperor Josef II. for his job as court musician during the final years of his life. Mozart can therefore be described as a big earner, but was unable to manage his money and spent it all immediately – as did his wife Constanze. His lifestyle was so wasteful, that Constanze didn't have to pay any inheritance tax following his death, as you can see from his estate to the right of the family portrait.
Incidentally, this is the only authentic painting of the Mozart family. The painter, Johann Nepomuk della Croce, completed it in 1781. His mother Anna Maria is the only person not standing next to the piano, as she died of pneumonia in 1778 during her son's concert tour of Paris. His sister Nannerl is sitting next to Wolfgang at the piano. Like her younger brother, she was also an extremely talented pianist. Both children were initially encouraged, but as they got older, Nannerl's training was neglected in favour of Wolfgang's.

Mozart was also able to pass on his love of piano playing to his many pupils. For one of them – Franziska von Jacquin – Mozart invented a little game. He composed two bars and one variation for each letter of the alphabet. Franziska was therefore able to hear her name in music. Try it! Play the "NAMADEUS GAME" and hear what your name sounds like in Mozart's musical style!
You can purchase a print-out of your name as a Mozart composition in the MUSEUM SHOP on the 4th floor. 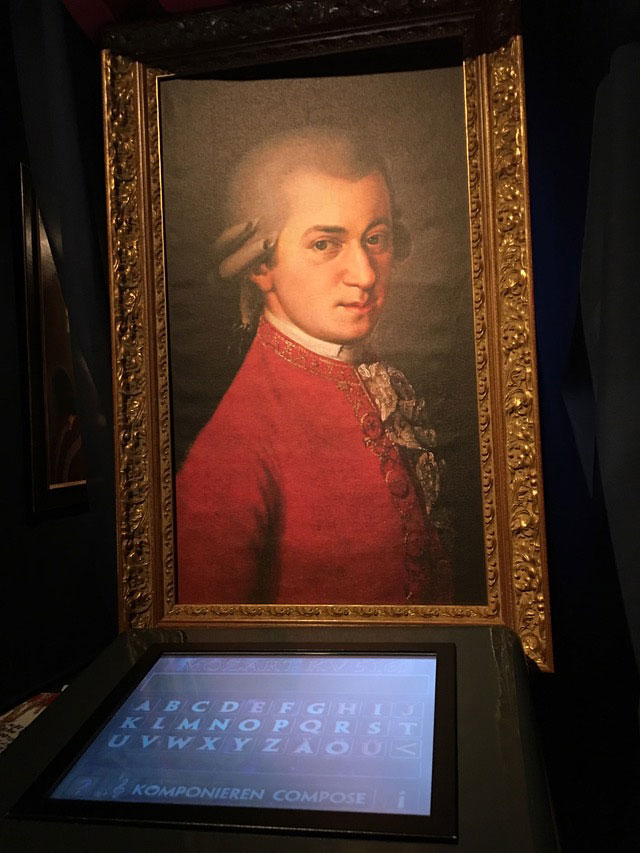 "Facing Mozart", a new interactive installation, enables visitors to bring Mozart's portrait back to life.
Sitting in front of the composer - just like looking into a mirror - the visitor is now in charge of the portrait's mimic and motion, all thanks to facetracking.
A portrait of Mozart created by Austrian painter Barbara Krafft in 1819 and produced on behalf of Joseph Sonnleithner 28 years after Mozart's death provides the optical basis for "Facing Mozart". Not only was Krafft's portrait painted under Mozart's sister Nannerl's supervision, but is also ranked among the most frequently replicated portraits of the famous comoser.
Moreover, phantom paintings of Mozart and his wife Constance, created by Stephan Andreae (Reiss-Museum Mannheim) using Forensic Scanning Technology give an idea of how Mozart may have actually looked like! 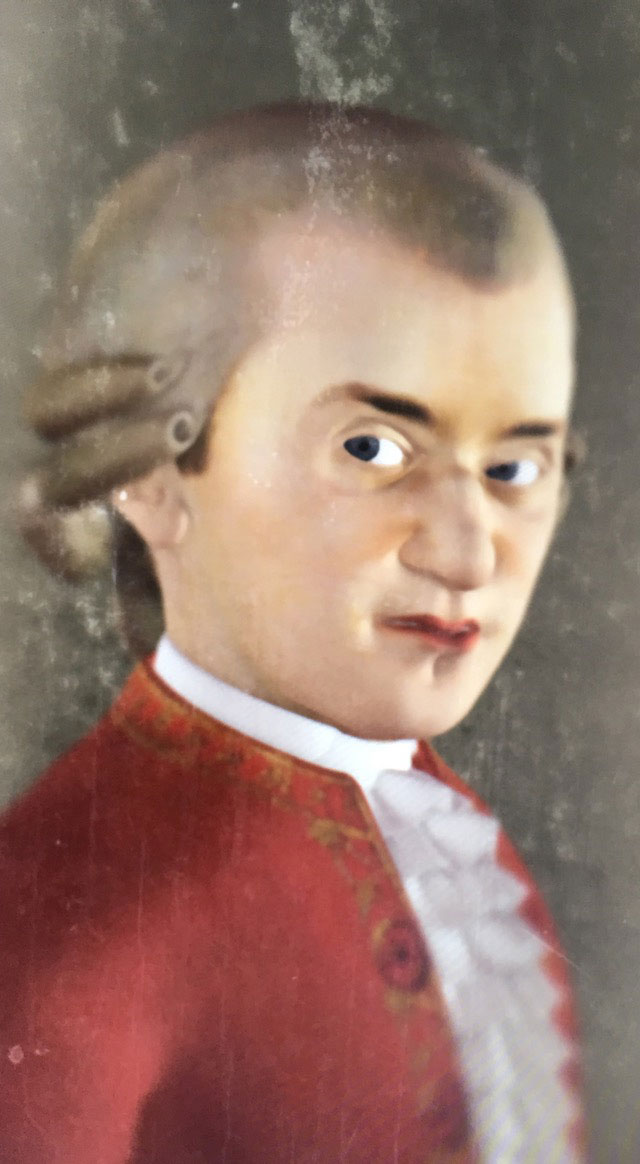 the Austrian musician "Falco" granted the composer a posthumous "rap acknowledgement" of his work in 1985 with the hit, "Rock me Amadeus" - it was the first and so far only German-language song to take the number one spot in the music charts in both the US and Britain!